RoboFight! is an example of a six-week idea that was implemented in twelve days. By that I mean that I bit off more than I could chew. I had the idea for a side-scrolling brawler à la* *Golden Axe, Double Dragon, Streets of Rage etcetera back in April with a view to making it for my May game.

However, due to personal issues and general Real Life™ things occurring, I didn't get started on the idea until the 20th of the month. What I should have done at that point was save the idea for June and make a smaller game. But as it was the only idea I had, I went with it. 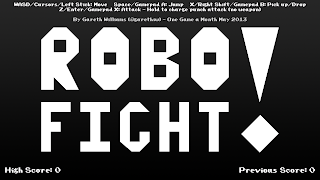 RoboFight! is far from finished, but the codebase is so sloppy I have zero interest in continuing with development now, which is a shame because there are a couple of genuine moments of fun to be had while playing the game.

June's game is going to be something extra small, as I don't have too much spare time at the moment, and I need to give myself a bit of a break. I'm maybe going to look at using F# just to see what the fuss is about.

Windows. If it doesn't run, you may need to install OpenAL.

And Linux. This has been tested on Linux Mint 14 (Cinnamon), you may need to install libSDL-mixer (sudo apt install libsdl-mixer1.2). If still no joy, run from a terminal (mono RoboFight.exe) and copy/paste the output into a comment below.